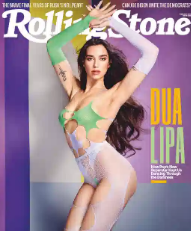 Rolling Stone is an American monthly magazine that focuses on popular culture.

It was founded in San Francisco, California, in 1967 by Jann Wenner, and the music critic Ralph J. Gleason. It was first known for its coverage of rock music and for political reporting by Hunter S. Thompson. In the 1990s, the magazine broadened and shifted its focus to a younger readership interested in youth-oriented television shows, film actors, and popular music. It has since returned to its traditional mix of content, including music, entertainment, and politics.