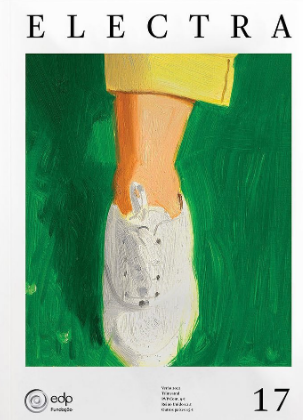 ELECTRA is an international quarterly of cultural, social, and political criticism, study, and reﬂection.

It addresses all cultural areas, and fosters the dialogue and a ﬂuid frontier between humanities and science, different artistic disciplines, and different cultural theories and practices.

In a numerical and digital age in which quantification has become the main instrument of governance, alongside generalised evaluation as a means of managing material and human resources, Electra dedicates the dossier of issue 15 to Numbers.

Here we find articles by Dario Gentili, António Guerreiro, Keith Hossack, Matteo Pasquinelli and Alain Supiot on the knowledge and philosophy of the number, on modern governance by numbers, and on the history of the algorithm from the Middle Ages to its use in digital networks. The author of the images in the dossier is António Sena, the creator of a work of great formal coherence and valuable singularity in contemporary art.

Two interviews are published in the "First Person" section: Alice Rawsthorn (with curator Vera Sacchetti), one of the most globally respected voices on issues of design and a critic and columnist for several renowned newspapers and magazines, with significant presence and influence in debate forums and social media; and photographer Paulo Nozolino (with journalist João Pacheco), an artist with a nomadic vocation, a crosser of borders, and averse to serene places and the tranquil images that surround them.

Ângela Ferreira is the author of this issue's portfolio. For over three decades, Ferreira has been concerned with issues of the colonial past, the post-colonial present and the future that is now beginning to be drawn. She presents here a set of paintings based on murals. This work is accompanied by an essay by the curator and historian Nomusa Makhubu.

For the "Scoop" section, renowned North American photographer John Divola has prepared a set of previously unseen works that belong to a series, still in progress, set inside a military air base in the California desert. Afonso Dias Ramos presents the artist and his work.

The 15th issue of Electra also includes a diary of singer-songwriter Lula Pena; Gonçalo Vilas-Boas draws a portrait of the writer, journalist and photographer Annemarie Schwarzenbach, one of the most fascinating figures of the first half of the 20th century; Antonio Montefusco takes a critical look at the ideological and political exploitation to which the official commemorations of the centenary of Dante Alighieri have been subjected since the 19th century; researcher of political communication Susana Salgado comments on a statement by Noel Gallagher, former lead singer of Oasis; António Guerreiro writes about the poetry of António Franco Alexandre; and Fátima Rolo Duarte talks about the term "New Normal".