Indietro  Couture in the 21st century 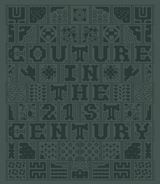 This lavishly illustrated book features essays from 29 of the world's top designers, who talk about fashion in the first decade of the 21st century, with its emphasis on craftsmanship and traditional techniques, and pay loving homage to the iconic couturiers of the past, expressing how their creativity and attention to detail has forever shaped fashion's future.

The book features personal essays on couture by today's most lauded contemporary designers, such as Giorgio Armani and Oscar de la Renta, plus the fresh faces who design for the top design houses: Marios Schwab, Jason Wu, and Maria Grazia Chiuri and Pier Paolo Piccioli for Valentino. Each designer describes their view of couture and the inspirations drawn from iconic figures such as Christian Dior, Yves Saint Laurent, Elsa Schiaparelli, Coco Chanel, Madeleine Vionnet, Madame Grès and Paul Poiret.

Essays are complemented by photographs and fashion illustrations, plus an intimate portrait of the designer by photographer Rankin, world renowned for capturing the wit and personality of his subjects. Couture in the 21st Century beautifully captures the divine and sublime of couture fashion in the hands of the world's best-known designers.

"Couture in the 21st Century is an inspiring opportunity to delve into the archives of the likes of Christian Dior, Yves Saint Laurent and Coco Chanel."