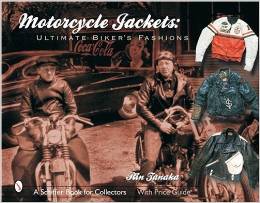 Motorcycle jackets have become a symbol of freedom for young people around the world.

Since World War II, these jackets have come to embody their sense of design, belonging, and rebellion.

Now Rin Tanaka continues his study of this fashion, delving deeply into its development.

Following the critical acclaim of his first book, Motorcycle Jackets: A Century of Leather Design, also published by Schiffer, he presents a completely new work, with over 1100 color photographs, and explores the jackets in detail, highlighting them with historical photographs that set the context.

Included are the jackets from the earliest days of motorcycling, racing uniforms, fashions of the Rockers in the United Kingdom, Harley Davidson jackets, and motorcycle jacket art.

A guide for valuing jackets is also included. Motorcycle buffs, fashion historians, collectors, and designers will delight in this extensive study of popular culture.