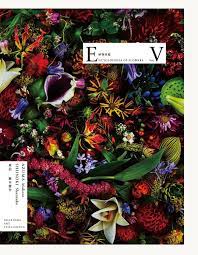 They set out to immortalize the pure beauty of flowers, faithfully and without thought for the self and found themselves returning to the roots of their series.

This is the fifth volume in the “Encyclopedia of Flowers” book series, a collaborative work between flower artist Makoto Azuma and photographer Shunsuke Shiinoki.

The 114 photographs from five series (Ikebana, Whole, Flock, Pivot, and Autogenesis) that make up this book have been created between 2019 and 2021, the time of the pandemic. Looking back in time in search of what to do during such extraordinary times, the artists came upon a book that describes the roots of traditional Japanese ikebana. It describes monks who, during times of severe famine, gave flowers to those who lost their lives, provided food and shelter for those in need, and used flowers to reinvigorate people’s hearts. Azuma and Shiinoki channeled these ideas and ideals into the “Ikebana” series.

Other series in the book use flowers and flower arrangements to examine relationships, question values and investigate instincts, such as “Whole,” which presents exotic, rare flowers on the same level as native herbs and weeds, or “Flock,” which demonstrates the survival instinct that drives individuals to form collectives.

“Encyclopedia of Flowers Vol. V” also includes an introductory essay by Makoto Azuma as well as a list and an index of all flowers used in the creation of its photographs (all texts in Japanese and in English translation).